Proof of quality by BateriasRobot.com

There exist many models of batteries compatible with our Roomba and though in the majority they speak about his capacity of load Ah, or mAh, few keep with what they specify. Definitively, the better thing is to try and to compare them …﻿

To clarify this aspect we tell them that we have realized.﻿

We have loaded to the maximum a Roomba 500 with an original iRobot battery of 3000 mAh used in 10 occasions. We have set it to work and we have obtained a duration of 2:20 hours. More than the own manufacturer of iRobot indicates.﻿

On the other hand, we have realized a test with one of our batteries 3300 mAh compatible with the Roomba and have obtained an autonomy of something more about 2:45 hours. It has overcome in more than half an hour to the original battery with bigger  load, of only 10 %...﻿

To make both tests have used the same computer, disconnecting it from the base and forcing the Roomba stop. ﻿

We understand that there are different  factors that could have influenced this analysis and to be just we have to admit that the original batteries are very good and are constructed by materials of the first quality. Because of it we sell them.﻿

The original batteries are good, but ours...﻿

One of the most important factors in the capacity of load and useful life of the batteries is their time of storage.﻿

Our batteries are made to demand, we control the times of production, transport and sale, work directly with the manufacturer and avoid long storages in the wholesalers. The fact of not having intermediaries allows us to control the royal life of the battery and to be very competitive in price.﻿

Sincerely, we understand that our batteries are not much better than the original ones and we believe that the difference in the performance obtained in this test is more in the time of storage that in their royal load capacity.﻿ 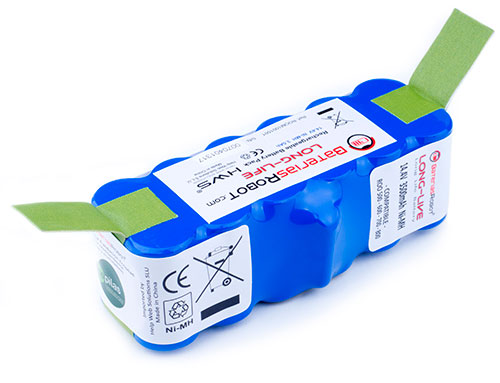